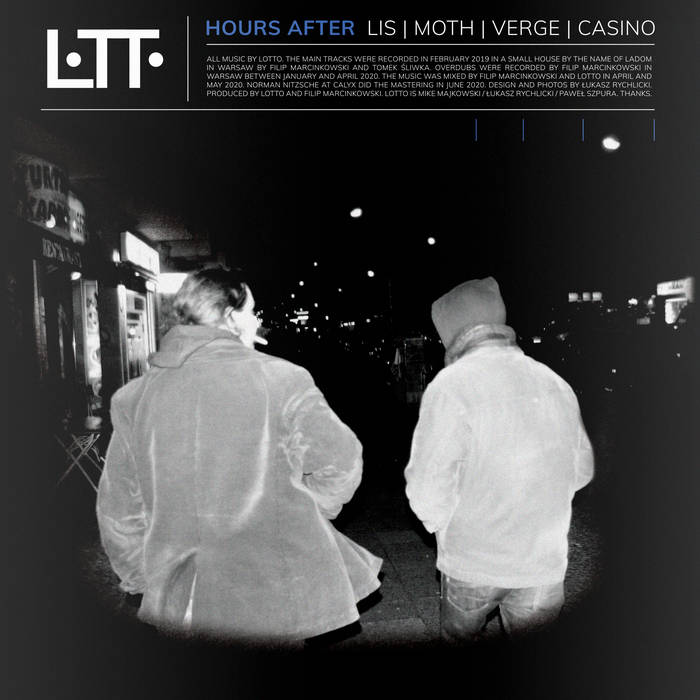 The Warsaw/Berlin trio LOTTO (Mike Majkowski, Paweł Szpura, Łukasz Rychlicki) carve their story for the fourth time. Their music, derived from free improvisation, always evolves into unknown directions. Such is also the case this time round. The band offers us four integral stories, stories without words, but with a clear imprint of the times and the reality around us.

Hours After was created in a small house in Warsaw's Jazdów, called Ladom (collectively run by the now defunct LADO ABC label, for which LOTTO recorded their debut LP). The band consciously moved away from recording in a professional studio, emphasizing intimacy, and escaping the rush and pressure of the studio clock. The trio decided to leave everything in their own hands, keeping everything in their control.

In the recorded songs you can feel an increasingly strange atmosphere of the surrounding reality. The stuffy, mysterious, disturbing aura that guides us through the song LIS evokes a feeling of nostalgia, as if after losing something undefined. It is like wandering through an empty pandemic city at night. The nervous, frenzied atmosphere in MOTH is brought to an extreme, as in the madness we experience from overwhelming amounts of stimuli, information, violence and aggression. VERGE is like standing on the edge, waiting for something undefined, something that might happen, something that everyone expects but no one knows what it will be. It's like waiting for an attack, for a short circuit that can undoubtedly occur. CASINO seems to bring apparent relief, but here too, after a while, the chords seem to say something else, turning us away from a well-chosen path into uncertainty. After this moment of transition, we go back to the start trying to seek relief again, like in an actual casino, where after a loss we always return with a hope that turns out to be deceptive.

Although LOTTO has often used literary and film references (Ask the Dust, Elite Feline - John Fante, OTE - Truman Capote, Fat City - John Huston, Leonard Gardner), this time the band has given up direct references, focusing more on their own observations and imagination. It's as if this time, reality is more surprising than art.

The band, despite using conventional instruments as their basis, has gone for an expanded and unexpected, deep sound. Dub-like reverbs, the use of non-obvious effects, such as interferences from a mobile phone received through a guitar pickup, as well as the Space Echo, Mu-Tron Bi-Phase, Roland SH-09 & TR-808, have all helped to complete their original sound.

Bandcamp Daily  your guide to the world of Bandcamp

Featured sounds by K.Spark and WIZDUMB, plus Basi joins the show to discuss his latest release.